If your garden looks anything like mine in the winter, it can get downright depressing.  By late February, we’ve had it with winter and the spring bulbs are still a month away.  Most “early” spring blooming trees and shrubs are even longer…..six to eight weeks away.

How would you like to get some color in your garden in February and March?  Most homeowners aren’t aware that there are several varieties of perennials and shrubs that bloom in the winter.  Today we’re going to talk about one of my favorites…witch hazel or hamamelis (hæməˈmiːlɪs).  Hamamelis is a genus of a handful of species, some native to North America and others to Asia.  Most are large shrubs that can get to 10 or 2o feet at maturity.

What makes witch hazel so interesting is that it blooms with spectacular yellow, orange or red flowers in winter, when little else is blooming.  The most common species used in the garden are Hamamelis virginiana and the Hamamelis X intermedia hybrids.

Hamamelis virginiana blooms in the late fall and is not as widely used as some of the intermedia hybrids.  These hybrids generally bloom in February and March and give an amazing display for up to two months.   Some cultivars are even heavily fragrant. 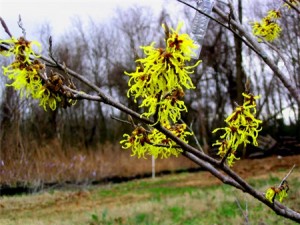 So, why doesn’t everyone have witch hazel in their garden?  Like other winter bloomers, most retail nurseries don’t carry them because they are only in bloom when the nurseries are closed.  If they are for sale, most homeowners will pass them by because they never get to see them in bloom.  Those who do go out of their way for one of these beauties are rarely disappointed.

If you want to get winter flowers, you have to be resourceful enough to find a nursery that carries witch hazel and buy it when it looks its most boring.

Here are some of the better cultivars to look for.  They are usually found at larger garden centers.

“Arnold’s Promise” has a fragrant yellow flower in late February and March.  It’s a slow grower to about 10-20 feet high and wide.

“Jelena” has fragrant burnt orange flowers in February.  A slow grower to 10 -15 feet high and wide. 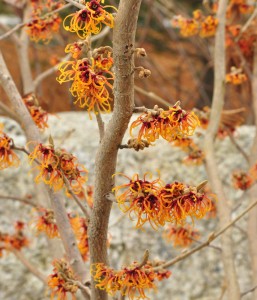 “Diane” has a fragrant red flower in late February and March.  It’s a slow grower to about 10-20 feet high and wide.

Witch hazels like full sun, but also do well on woodland edges and make a great transition from garden or lawn to woodland.

Let us know if you have one!

This entry was posted in Gardening, Shrubs. Bookmark the permalink.